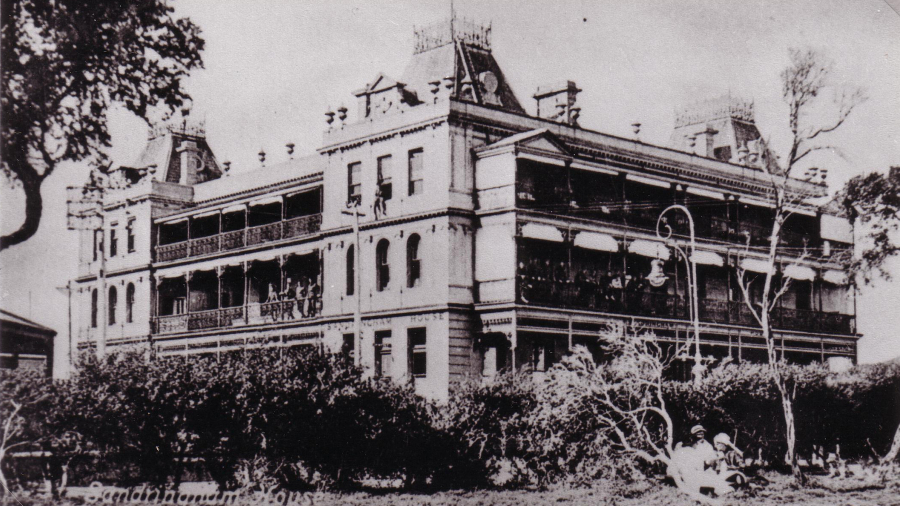 The temperance movement started in the United Kingdom in the 1850’s and eventually
spread to Australia. A Scotsman called James Munro, a temperance leader, became a
powerful force in Melbourne for teetotal hotels to be built. This fiery man was active in antialcohol
organizations and became Premier of Victoria. Under Munro’s influence ‘coffee
palaces’ were built in the city, in suburbs and country towns; substantial buildings often of
elaborate design and construction. They were in direct competition with licensed hotels.
The Sandringham Coffee Palace was one of these. Built by a syndicate during the land boom
and opened in 1889, the Sandringham Coffee Palace provided quality accommodation and
meals for travellers and visitors without the alcohol. Like all coffee palaces it was well served
by public transport. The Sandringham Club met at the Coffee Palace; it was a socially
acceptable place to meet and partake of meals. Mechanics’ Institutes also competed against
licensed hotels with halls to hire out for public meetings.

An advertisement in The Age (Melbourne) in 1894 referred to ‘Sandringham House (late
Coffee Palace), station, sea baths, superior accommodation, moderate tariffs, tennis,
billiards free.’ Photographs show the name painted on this big and prominent stone
building that fronted both The Esplanade (Beach Road) and Melrose Street. Of three storeys
high it had deep and airy verandahs decorated with cast iron lace and the roof was
decorated with mansard roofs from which I imagine one could access for thrilling panoramic
views. The 80 apartments looked out onto the sea or inland.

S.S. ORSOVA steamed into Melbourne in 1922 with my mother Catherine on board
accompanying her parents, William and Kate Radford, and her youngest sister. Their first
part of the sea journey had started from the Port of Liverpool (they lived in Scotland) to
India where they had relatives: the family embarked from India for another long sea voyage,
this time to Australia to see Catherine’s oldest brother who had fought with a Scottish
regiment in WW1, survived gassing, and come out to Victoria on the Commonwealth Soldier
Settlement Scheme. Their second son also in the Scottish regiment was tragically killed in
action in Belgium. The third, and youngest son remained in Scotland to continue his studies.
Catherine’s older sisters were to join the family in Australia, a country my grandparents
soon warmed to – they liked the warmth and sunshine and the fruit and vegetables.
S.S. OSTERLEY steamed into Melbourne later in the year bringing Catherine’s two older
sisters who’d remained behind in Scotland to finish school arriving in nice time for
Christmas. The Radford’s apartment at Sandringham House faced north so they would have
had views looking down the Bay and taking in the city skyline. Sandringham House was their
safe harbour and they lived there for eighteen months. My grandparents then bought
“Ennerdale” a house in Bluff Road, Sandringham, and stayed.

Electric trams replaced the horse drawn trams for trips to Black Rock. Scenic walks from
across the road and past the Rotunda could be enjoyed along the ti-tree foreshore or down
the cliff path to the beach along the golden sand to the red coloured Red Bluff and beyond
to Half Moon Bay. Thank goodness that has not changed.

During WW1 returned soldiers that were ill or recovering from wounds stayed at
Sandringham House which was requisitioned by the Army in mid- 1915 as a convalescent
hospital and closed to patients in November 1916.

Coffee Palaces were losing the battle to survive. During the Great Depression in the early
thirties it was decided that a licensed hotel was needed in Sandringham to encourage more
holiday makers, and sites were investigated including the de-licensed hotel on the corner of
Beach Road and Georgiana Street. Sandringham House was certainly in the running.
Residents who would be affected were given the vote and the result was positive: The
Licensing Board decided on that site in 1933 and so Sandringham House went through the
next stage of its history. Work was undertaken to modernise it – altering its architectural
heritage by removing the mansard roofs and most of the cast-iron lace work from the
verandahs. The building was renamed ‘Hotel Sandringham’ and the new name painted
outside. A look at the accompanying 1934 advertisement shows the now licensed hotel
offered a range of activities to be enjoyed such as horse riding at a ‘first class riding school’.
They offered lock-up garages, too. Sadly, this was not to last. In 1967 the Hotel Sandringham
was demolished.

On this site the Commodore Hotel was built in 1968. The original foundation stone from the
Coffee Palace is inserted in the wall on the north side of the building. The Commodore
hosted many lively concerts featuring well known rock bands in the seventies and eighties. It
ceased trading in August 1988 and another entity took over. The new owners called it the
‘Sandringham Hotel’ – it’s also known as ‘The Sandy’ and is a popular local fixture. Beautiful
views overlooking the bandstand rotunda and out to sea remind us why the Coffee Palace
was built here.