Jane was also entrepreneurial and built a large home at 12 Crisp Street, Hampton to accommodate holiday-makers who rented rooms from her circa 1912 – 1918.  (The house was built by a Mr. Frank Jackman who was the husband of one of her daughters, Florence.)

The photograph above shows ‘The Armistead’ which became 12 Crisp Street, Hampton, home of the Sherrard family in November 1911.  The woman is Edith Sherrard, my great aunt, standing next to a family friend. Note the front elevation of the timber house appears to look like it is built of stone blocks, but it is an architectural detail called timber ashlar which is accentuated by a colour scheme in which the ‘mortar joints’ are painted a cream colour to contrast with the ‘blocks’ and appear as an expensive stone house.

Despite living apart for years, Jane had been across to Tasmania and brought her husband John home to Hampton where he lived in a tent in the backyard.  This was confirmation that their marriage was in trouble.  Canny Jane however was able to collect 700 pounds assurance on her husband’s life as she had kept up the policy payment for all the years he was away.

LEFTJohn Silk Sherrard junior tending his chooks in the backyard pretending that family life was normal!

John and Jane’s grand-children: Florence born 1907 and her brother Frank junior born circa 1909, at Christmas 1911 in the backyard of 12 Crisp Street.

The infamous tent is visible on the right in the background.

Photographs courtesy of Margaret Watts.  Every attempt has been made to correctly attribute photographs to the copyright owner. Opinions expressed in this Newsletter are that of the author and not of the Society Committee or its members. 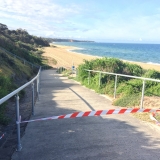 This is a very important time in the history of the wo ... 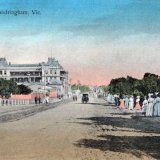 NOTICE OF 34TH ANNUAL GENERAL MEETING To be Held At BE ... 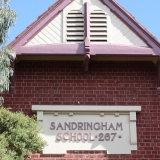 Our historical society is working with the School Council ...